If Te Waikoropūpū Springs can’t be saved, what hope is there for New Zealand’s other aquifers? By Cherie Pascoe.

You can submit to extend the protection for Te Waikoropūpū before 14 March 2018: https://action.forestandbird.org.nz/tewaikoropupu/

Nestled in the Tākaka Valley of Golden Bay, between Abel Tasman and Kahurangi National Parks, are the largest coldwater springs in the southern hemisphere. The springs contain some of the most optically pure water in the world (the third-clearest after Nelson’s Blue Lake and Antarctica’s Weddell Sea). Rich in calcium and home to all kinds of unique plant and marine life, they are a veritable Garden of Eden. Underwater view of the main spring at Te Waikoropūpū showing a blast of water from the spring hitting the surface. The crystal clear waters are an iconic tourist attraction.                  Photo: Darryl Torckler

Home to tiny creatures called “stygofauna” that are responsible for its clarity, the springs discharge 14,000L/second at a constant temperature of 11˚C. This paradise, however, faces challenges similar to many other groundwater sources in New Zealand. Currently, 500L/second of water from the recharge zone of the Arthur Marble Aquifer that feeds the springs is allocated to various users in the Tākaka Valley. The Tasman District Council proposes to draw a further 356L/second in response to increased intensive dairying needs. This has caused concern among conservationists and scientists, who are worried about the impact of taking more water (and the corresponding increase in nitrate pollution) on the stygofauna.

Forest & Bird’s Golden Bay Branch chairperson, Celia Butler, says the landscape of the springs, and the unique nature of the Arthur Marble Aquifer and its stygofauna, must be protected. “It’s an ethical question,” she says. “What do you risk for the benefit of a few?” Forest & Bird’s Top of the South Island regional manager Debs Martin agrees. “Te Waikoropūpū Springs are an outstanding natural feature. They are nationally and internationally important, with some of the highest-purity free flowing water in the world. It’s vital they remain this way,” she says. “Any actions that may degrade this incredible place, such as taking more water for intensive dairying or, as has been suggested, allowing gold mining on adjacent farmland, would be morally and ethically wrong.”

Dr Don Mead, a retired scientist and member of Friends of Golden Bay, has spent the last few years studying historical data from the springs. His research has looked at measurements collected every three months since 1990 by GNS Science. Dr Mead says that the nitrate concentration has risen by roughly 1.5% over this period, which seems to be in line with an increase in dairy intensification in Golden Bay, but has stabilised in recent years. However, since April this year, the nitrate levels in the main spring have risen and are currently more than NIWA’s “safe” 0.4mg/L level.It remains to be seen if this is a new trend or a blip.

Andrew Yuill, Friends of Golden Bay chairperson, explains why the water is so clear. He says that water contains dissolved organic matter from trees and leaves. In the aquifer supplying Te Waikoropūpū, the organic matter builds up to form a biofilm. The stygofauna and bacteria feed on this biofilm, constantly removing the organic matter from the aquifer, making it crystal clear. “Nothing else in the world operates in quite the same way. The aquifer must remain a healthy place for the stygofauna,” he says. Stygofauna: These critters provide many essential water cleaning services, including eliminating harmful viruses and bacteria, in our aquifers, including Te Waikoroūpū. Photo: supplied

Andrew stresses that scientists don’t know what impact extracting more water will have on the stygofauna. As well as  changing the flow, there will be a corresponding increase in nutrients from intensification, which could kill the tiny freshwater critters. “A precautionary approach is needed. We cannot adaptively manage an aquifer,” he adds Andrew has worked closely with iwi Ngati Tama ki Te Waipounamu to apply for a Water Conservation Order (WCO) for the springs, saying it was a water system with outstanding characteristics that should be protected.

Environment Minister Nick Smith recently publicly accepted the WCO application – the first of its kind in New Zealand. Now the application has been accepted, a tribunal will be set up to look at the future protection of the springs. Kaumatua and spokesperson for iwi Ngati Tama ki Te Waipounamu John Ward-Holmes says, “The springs have enormous significance to the iwi as kaitiaki (caretakers) but also our ancestors, our whole community. and our descendants who will look back in judgement of what we have left for them. “The WCO is one way we can try to ensure that the water stays as pure as it is now. If the WCO is granted, it will be written for all to see that this is a sacred place without having to prove it every time a [water] take is proposed.”

Debs Martin points out that a Water Conservation Order doesn’t automatically mean the springs will be fully maintained in their pristine state. This will depend on the detailed protections contained in the order. She says recent monitoring showed a huge increase in E.coli flowing into the river just downstream of the springs. If the council allows more water to be taken from the spring, it would increase farming upstream, which could lead to nitrogen leaching into the springs.

Andrew Yuill believes that water management is a social issue as well as an ecological one. “There is an unavoidable trade-off between the intensity of farming, the amount of profit, and environmental impact. This can be mitigated by reducing farming intensity and implementing better eco-farming. “Agriculture has an essential role to play in our economy, and farmers should be able to hold their heads high because they are part of a sector that operates in a good, sustainable, low-agricultural-impact way,” he added. “This is our natural legacy,” adds Debs Martin. “We need to work together to protect these ancient springs for future generations to enjoy. If we can’t save Te Waikoropūpū, then what hope do we have for any other waterway in New Zealand?” *A version of this article first appeared in the Spring issue of Forest & Bird magazine, read back issues on www.issuu.com/forestandbird or join  Forest & Bird to receive the latest issue. 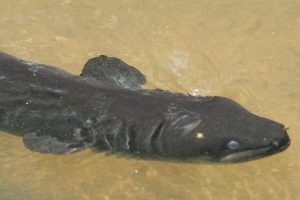