I’m cool. I look great – anyone who says different is jealous. I am Kākāriki, eight inches of attitude. Vote for me in Forest & Bird’s Bird of the Year competition. I’m a beautiful bird, and I’m a mystery bird. I’m most deserving of the title ‘Bird of the Year’

I’m part parrot, part rosella, part lorikeet – but all mystery. You may think that an absolutely pretty thing such as I can only grace tropical rain forests or the Parisian couture fashion houses, and you would be right.

The Antipodes Islands aren’t for everyone. Sitting at 49 degrees in latitude and 860 kilometres southeast of Stewart Island/Rakiura, these islands aren’t exactly balmy.  In 1999, conservationists Gerry Clark and Roger Sale died when Gerry’s yacht the Totorore was wrecked here. So what or who are on these islands?

Firstly there are albatrosses, rock hopper penguins, southern elephant seals – the sort of wild life that you would expect on an isolated sub-antarctic rocky outcrop (a World Heritage site). Then, there is me. The southernmost kākāriki.

Around 400,000-625,000 years ago, something prompted the ancestral kākāriki to fly to New Zealand and further (to the Antipodes). Parrots don’t like crossing large distances of water, but years ago something happened that made them do it. That something was most likely a combination of environmental conditions, that possibly, created an extraordinary fruiting of one or more species of trees that appealed to the kākāriki. This would both attract and allow kākāriki to stock up energy and breed during winter months. When the food supply returned to normal the kākāriki would have flown off in search of more, yet some stayed.

The red-crowned parakeet colonised the Antipodes Island and then evolved into Antipodes Island green kākāriki. It lost its red, and adopted an emerald green plumage including royal violet-blue crown. Fantastic. Just when you thought you were getting to know me.

But wait there is more, in the 1890s I was pest. A pest? Me? Beautiful me? What was New Zealand like when I was a pest? I must have given this country colour and vibrancy and energy. Is that why you got rid of me?

Kākāriki lived throughout New Zealand. Our populations used to rise and fall quickly depending on factors such as the availability of food or the warmth of the winter. In a good year for kākāriki, flocks would descend on orchards. Kākāriki aren’t afraid of loud noises, or people, so in the late 1800s Orchardists didn’t find it difficult to shoot kākāriki and flocks would return until they were no more.

So orchardists shot us, our forests have being destroyed, and introduced pests have fed on our eggs. It’s a hard life for beautiful things.

Kākāriki are endangered. Scarce on the mainland, but we survive on islands, and breed in captivity.

There are many sub-species of Kākāriki . Perhaps a little more mystery as to why? On Little Barrier Island, the yellow-crowned Kākāriki  lives in the forest and the red-crowned lives in the lower hills. One small island – two kākāriki species.

Yellow, crimson and emerald crowned kākāriki. Is there any more? Yes, many.  One is the Orange-fronted kākāriki species and this is the most endangered, with less than 200 individuals remaining in the North Canterbury.

Watch this video then vote for us.  International Bird of Mystery – The kakariki. 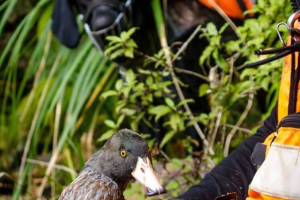 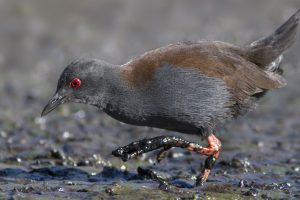