Yesterday saw #NationalPoetryDay2018 and #BirdOfTheYear trending alongside one another on Twitter. Alison Ballance from Team Hoiho challenged Twitter to combine the two, calling for people to write poems about their Bird of the Year.

A poem about bird beaks from @giselledraws

Giselle Clarkson is running her campaign for the royal spoonbill (Kōtuku Ngutupapa) based on its strange looking bill. They move their bill from left and right in shallow water, using their spoon-shaped bill to gobble up fish, shrimp, crustaceans, aquatic insects and frogs.

An acrostic about Hoiho from @OtagoMuseum

Otago Museum have used their poem to highlight the yellow-eyed penguin’s noisy call. Māori named them hoiho, which translates to “noise shouter”. It refers to their piercing call, which can often be heard over the crashing waves.

Kakī are found on braided rivers in Canterbury where they poke around in the riverbed stones looking for insect larvae, fish, molluscs, crustaceans, worms, and insects. As Daniel Collins has highlighted in his haiku, they are endangered with just 132 individuals left in the world.

A haiku about gannets from @mifflangstone

Gannets are known for being excellent divers and have a number of adaptations that help protect their faces and bodies from the impact of hitting water at such high speeds. The have “airbags” in their face and chest under their skin, which acts like bubble wrap, and cushions their impact. They also have nostrils inside their mouth and their eyes face forwards to help them judge distances better.

You are a gannet
Your speed makes me feel giddy
Do a dive bomb bro https://t.co/yDq8n5f2oJ

New Zealand research institute Scion have made like a kārearea and gone straight for the kill, claiming that other birds “suck” in comparison.

A poem about takahē from @VoteTakahe

Team takahē used their haiku to highlight the bird’s strange bowel movements. Surprisingly, they can do seven metres of cylindrical poo containing tightly packed grass in a day. 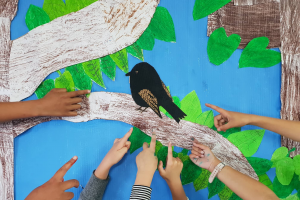