The Minister of Conservation and the Government are presenting ‘alternative facts’ in their response to the Supreme Court ruling yesterday on whether specially protected conservation land can be swapped.

Here are some verifiable facts around the issue.

Alternative fact 1: The Minister of Conservation has told journalists that the 22 hectares she tried to remove from the Ruahine Forest Park is low conservation value land.

In fact, the land has been assessed, and the Department of Conservation has accepted that it has high conservation values. The land is home to long tailed bats, NZ falcon, fern birds, and rare wetlands and plants.

The Supreme Court itself said:

[18] … there is no suggestion that the values identified on the 22 hectares were not significant and did not in themselves warrant continued protection in the absence of the exchange.

[120] … nationally significant values would be lost in the inundation …

Alternative fact 2: The Minister of Conservation also said this morning that land swaps of this kind occur “a couple of times a year”.

In fact, revocations of specially protected areas have occurred just 3 times in the last 10 years.

In one case, it was a paddock and had been for many years. In another case, it was a formed road, accidentally built on conservation land. Those instances are very different to the Ruataniwha case, where high value land was to be downgraded just so it could be swapped and destroyed by inundation.

Alternative fact 3: The law needs to be changed to allow these swaps to go ahead.

In fact, land swaps are already allowed for areas that have lost or have no conservation values, or are not yet specially protected (stewardship land). The Minister says she agrees high value land should not be available for land swaps – this is exactly what Forest & Bird have said all along, and what the Supreme Court agreed was the case. In a land swap of two areas with conservation values, you start with two pieces of land and then facilitate the destruction of one.

For example, in the Ruahine situation, the Government could have purchased the Smedley block land proposed for the land swap without destroying 22 hectares of Ruahine Forest Park. 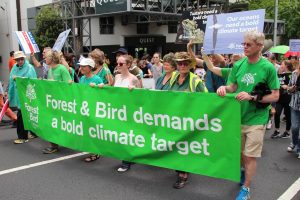